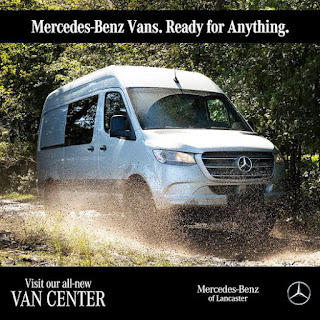 I had a '72 450sl to drive as a company car for a year or so.  No better way to cruise Southern Florida than in a drop-top grey market MB.  No one had to know I'd used stop signs to rebuild the floor boards....

Anywho, just saw this ad on FailBooks, and it struck a chord.

As a former tech, nothing vehicular is safe from my judgement and scorn.

I read this ad, and my first thought was.... "Yeah.  Ready for anything.... except just driving down the road without breaking down or needing service".

See, my last tech job our shop also rented vehicles.  Mostly 15 passenger vans, but we had a half dozen Sprinters done up as busses and party limos.

NOTHING gave us the trouble those Mercedes built bastards did. We were doing triple the recommended service.... none of them went out without being gone over as closely as we could.... and we almost never had a rental on them longer than a day where we weren't sending a tow truck or getting angry phone calls.  They never failed to fail, in weird and expensive ways.  Everything took special tools, nothing was less than outrageously priced, and they were hateful beasts to work on.

It was a good day when the boss got rid of those rotten machines.