W: 346.0
BS: 140
I know what I did.  My evening had Bourbon in it, and warm olives. Sigh...
Ugh... 10% inflation on wholesale numbers for 2021.  You know that's coming down the road to smack us in the face soon.
A) No trust government numbers.  Government is lying asshole.
B)  We haven't had a rent increase in 10 years.  Will this be the year Craig caves and asks for more?
Thought this morning.  Is there some breed of human you tend to trust more (or less) based on their profession?  If so.... why?
Police officer?
Scientist?
Professor?
Doctor?
Mechanic?
Priest?
Lawyer?
Nurse?
Mailman?
Farmer?
I'm wheezing a bit today.  Allergies, cold, heart failure? One from column A and one from column B I guess.  Extra Lasix again, I think, and all the usual vitamin suspects.
The usual chores done.  Also, repaired the vacuum.  Fairly new, but it overheated and tripped the thermal protection.  A little hunting found a clog in the handle, and a component installed 90 degrees from it's proper fit.  It partially blocked the tube and caused the full blockage.
Beans.... I tried dry pinks in the Instant Pot, as advised by several friends.   Damn... double damn.... that is easy!  I will be using the hell out of dried beans from now on!
On another note, gonna be some hella good baked beans here around dinner time.
HT to Peter for finding and posting this bit of prose:

A couple years ago I was working security at a bar in northern Virginia. I overheard a table of college kids arguing about gun rights and gun control and it was getting far too emotional so I did what any sane combat veteran would do and attempted to exfiltrate. I must not have withdrawn as surreptitiously as I intended, because I was stopped in my tracks when a 5-foot-nothing brunette seemingly leapt in front of me and blurted out “excuse me, can you help us?”
I’m sure I must have looked irritated as I cycled through the possible quips and excuses I considered available to me but being uncertain that she wasn’t some Senator’s daughter, I caved: “What’s up?”
She basically leads me to this table of 2 other females (probably both named Karen) and a very soft looking male.
Becky: “So, we were just talking about current events and, you know. So, you look like you’re probably in the military, right? Like the Army?”
(When you accuse someone of being in the military you probably don’t need to give an example)
Me: “Similar.. yea”
Becky: “Right. Okay. So, do you think civilians should be allowed to own guns?”
Me: “Most of us. Yes.”
Becky: (clearly not happy with my answer) “Okay, so, why do you think you need a gun?”
(At this point it’s almost 2am and I’ve just given up on patience. Hold my beer)
(With intentionally overt condescension): “Oh, honey, I don’t. I don’t need a gun.”
Becky stares at me blankly, so I continue, but with a more serious tone:
“I could follow you home, walk up your driveway, and beat you to death with the daily newspaper.
I could choke you to death with that purse.
I could take a credit card, break it in half, and cut your throat open with it.
With enough time and effort I could beat your boyfriend here with a rolled up pair of socks.
I could probably dream up six dozen other ways I could easily end your life if you gave me an hour or so.
If I wanted to, I could wrap my hand around that beer mug and kill all four of you before you could make it to the exit. The worst part is, in your utopian little fantasyland, there ain’t a thing any of you could do about it.
I don’t need a gun.
You need a gun.
You need a gun because of men like me.”

For those who stuck this far in....  here's those baked beans: 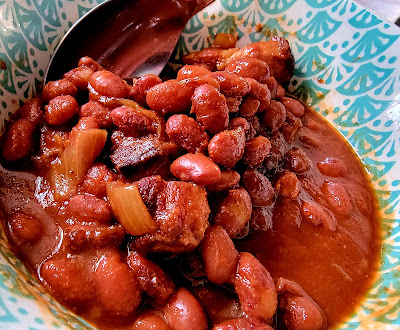 Really very easy to make.  If you want a recipe.... just ask and I'll write one up.